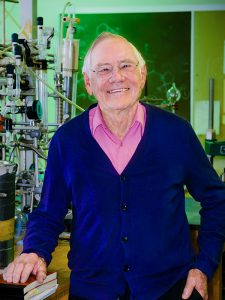 Alkali metals are highly reactive, especially in water, and are historically considered hazardous to use and store because of their reactivity. Dr. Dye’s six decades of research on alkali metals have resulted in the development and commercialization of numerous ways to make them safer, allowing them to be used in a variety of applications that have impacted multiple industries, including pharmaceuticals, petroleum refining and fuel cell production. In 2005, Dr. Dye co-founded SiGNa Chemistry Inc., which uses his work to transform alkali metals into safe powders. SiGNa develops high performing, cost‐effective chemical products that are also environmentally safe.

Dr. Dye arrived at MSU following his 1953 PhD at Iowa State University and, at least on paper, retired from MSU in 1994. Since then, he has conducted research and mentored students as an extremely productive Professor Emeritus.

MSU Technologies is pleased to recognize Dr. Dye and his team for their research and innovation.

Learn more about Dr. Dye and his research.