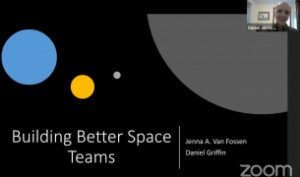 Fossen and Griffin are both graduate assistants in the MSU NASA Lab on Team Processes. This lab is run by Steve W.J. Kozlowski and C.H. “Daisy” Chang from the Department of Organizational Psychology.

The lab is studying what makes teams of astronauts successful. Currently, NASA is planning to send a team of astronauts to the moon by 2024 and to Mars shortly after.

The MSU NASA Lab puts test teams in conditions similar to what they might experience in space in order to study how the team members interact. These conditions are referred to as ICE conditions: isolated, confined and extreme. The lab is working to help astronauts overcome these conditions for successful trips into space.

The test group will spend a few weeks to months on these tests. During the study, the MSU NASA lab will use daily reports, surveys and wearable sensors to track the team members’ interactions. They then study their interaction, conflict and cohesion patterns. Using their findings, the lab can determine when NASA should intervene should a conflict arise.

The MSU Innovation Center became involved with the project in 2017. The wearable sensor technology has two aspects the Innovation Center is working with – the physical sensor itself and the analysis of the data collected. They are exploring alternate uses for the sensor, including training employees for improved customer interactions, and understanding the way people interrelate in different work environments and how those environments might be optimized to support interaction.

“We would like to see this MSU technology really take off – pun intended,” said Raymond DeVito, technology manager at the Innovation Center. “It has the potential for both NASA application and for earthbound commercial use.”