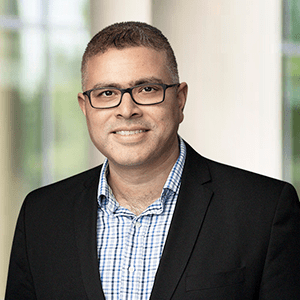 Prem leverages over nine years of experience in venture capital, investment banking, valuation, and economic development to fulfill his responsibilities as Director at Red Cedar Ventures (RCV) and Michigan Rise Pre-Seed Fund III, which are the venture investment subsidiaries of the Michigan State University Foundation.

Prem brings a broad and deep knowledge of the innovation ecosystem in the Midwest and has invested in over 50 tech startups that went onto cumulatively raise over $500M. Prem began his career in venture capital as an Associate at Michigan Accelerator Fund I in Grand Rapids where he led the sourcing and diligence operations of that first-time fund. He next served as Portfolio Manager at Michigan Economic Development Corporation where he managed a large portfolio of tech startups and venture funds, and negotiated complex forbearance, restructure and conversion terms with public and private stakeholders. Most recently Prem was Director at Invest Michigan where he sourced, led investments and was an observer in several portfolio companies.

Prem has a Bachelors and Masters in Business Administration from Western Michigan University and Grand Valley State University respectively. In early 2017, he obtained a MS in Information from the University of Michigan where he studied Health Informatics and Human-Computer Interaction.